Ten reasons why it's time to sell your condo

On the lighter side:

1. You just got married and got the news of a third tenant coming into the picture. Your 600 square foot condo won't cut it anymore regardless what your single friends have to say about it.

2. You find that the condo fees keep rising yet the building's appearance doesn't seem to change and Bob, your current condo manager just got himself a new BMW.

3. You hear of new LRT station being built near by. You got excited, the value should go up. Sometime later, you realize that you live on the first floor and the railroad trucks are next to your window. Wonder why you look so pail and tired all the time.

4. You have just gave a loonie to the helpless guy standing in front of Tim Hortons and while walking home you noticed a new development sign. Finally, there will be a new condo complex built next to your building. As you get closer, you see the fine print that reads " Future Homeless Shelter "

5. A new neighbour just moved in next door. He looks pretty friendly and well dressed. Then you notice a sharp increase of visitors to his suite at all hours followed by a subsequent drug bast, Swat team and all.

7. Your younger mooch brother just lost his job again and knows where you live.

8. The family of seven just moved in above you.

9. You live on the 12th floor and the elevator usualy breaks down on grocery day.

10. Your older brother also lost his job and also knows where you live.

See below table for current condos for sale under 500K in Edmonton Downtown, Oliver, Rossdale and Riverdale by age, number of listings, average size in square feet, average list price and per square foot price.


Edmonton Real Estate
Posted by Derek Hulewicz at 10:34 AM No comments:

"Work on Edmonton's first northern LRT extension could start this fall after the federal and provincial governments agreed to fund the NAIT line instead of a new Gorman station.
Although the two senior levels of government announced in April $140 million in economic stimulus money would go to build Gorman, city officials who saw NAIT as a higher LRT priority pushed for a new direction.
Labour Minister Rona Ambrose has now approved the change, according to a city report released Thursday.
The provincial government is willing to go along as well, treasury board spokesman Gerald Kastendieck said.
"It's actually something between the city and the federal government ...That's something they can work out. As long as they're agreed, the province is fine with that."
The grants will help pay for the $280-million first stage of the project, which will link Churchill Station with Grant MacEwan College.
If cash arrives by September, crews can begin relocating power lines and storm sewers this fall in preparation for the start of major work early next year, said Brad Griffith, director of LRT design and construction.
While most of the tunnel under the new Epcor tower is done, underground links to Churchill Station and west to where tracks reach daylight between 103rd Street and 104th Street near 105th Avenue must be built, Griffith said.
The Grant MacEwan station could open between 104th Street and 105th Street in the spring of 2013, although councillors must still approve a source for the remaining$70 million needed for that segment.
The city hopes to receive another $500 million from the provincial Green Trip program to take the $800-million project to NAIT the following year.
Coun. Kim Krushell, a longtime advocate for the line, was thrilled the other two levels of government are on board. "To try to do Gorman right now on top of the NAIT line, we could be in a situation where we're doing two at the same time and not able to do anything," she said.
"It doesn't mean that Gorman isn't a future option. It's just that we need our LRT to hook up all to four postsecondary institutions and hospitals. That's more of a priority for our citizens."
A separate report going to council next Wednesday recommends the city continue negotiating to buy the land needed for the Gorman line, a bus loop and a parking lot.
Creating a satellite lot, similar to the one approved in Heritage Valley to serve the Century Park LRT station, along with neighbourhood planning and construction, would cost about $50 million, the report says"

Posted by Derek Hulewicz at 8:59 PM No comments:

If you think no one cares about you, miss a couple of mortgage payments.

Home: A place where you come from work to work.

This house has every new convenience except low payments.

Homesickness: What you feel every month when the mortgage is due.
Posted by Derek Hulewicz at 8:20 PM No comments:

On the positive note for the sellers, the inventory has decreased by 6.8% to 273 condos available, with 227 under 500K and 46 above that price. The more expensive condos have harder time selling with only one unit sold above the 500K mark in August. There was no change in sold-to-list price ratio -96% , 52 was days-on-market and absorption rate was 4.

Note: The good properties sell fast. That was not so at the beginning of the year where the buyers had more choice and could take their time with offers. I personally find that a large number of downtown buyers currently seem to be younger people who are interested in newer condos and have a similar price range and criteria. The downtown core is definitely more attractive to them now more than in the past and the central location and access to transportation are big factors for many. 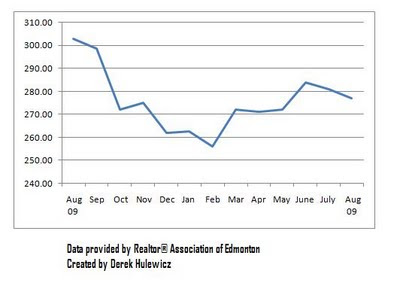 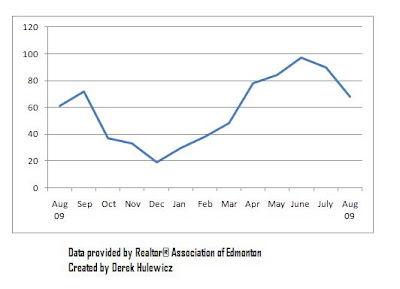 For a closer look at the current Downtown Edmonton and area MLS® listing, check out http://www.edmontonrealestateweb.com/search.html
Posted by Derek Hulewicz at 11:29 AM 5 comments:

The site of a new entertainment complex and arena

"Edmonton Oilers owner Daryl Katz has purchased land in downtown Edmonton which could be the site of a new entertainment complex and arena that will replace the aging Rexall Place.
Documents obtained by CBC News show the land at the corner of 101st Street and 104th Avenue was bought on June 24 by Edmonton real estate company Western Asset Mangement, then later sold to the Katz Group. The land is the current site of the Baccarat Casino.

The Rexall pharmacy billionaire, who is based in Edmonton, has also purchased an adjacent block of land on the south side of 104th Avenue — the parking lot across the street from the Greyhound Bus terminal."
Posted by Derek Hulewicz at 7:46 PM No comments: